When national denim and jeans retailer County Seat hosted a Frisbee tournament at Parade Stadium in Minneapolis in the summer of 1975, little did they know that it would become the watershed event that would spark the creation of one of the most innovative, popular and successful flying disc clubs in the United States─the Minnesota Frisbee Association (MFA). Many flying disc organizations have come and gone over the decades, but the Mighty MFA has stood the test of time since that fateful day when the confluence of ideas and individuals set the primordial spin of the disc into motion. That chance meeting of flying disc enthusiasts led to regular gatherings every Wednesday evening at Thomas Beach on Lake Calhoun in Minneapolis, and it was there the idea of forming an “official” Minnesota Frisbee club was first entertained. By mid-summer, July 19, 1975 to be exact, that idea became a reality when a sign-up sheet was circulated among the players at Bossen Field in South Minneapolis who were competing in a distance and accuracy tournament sponsored by Vinya Rosé wine in conjunction with Wham-O manufacturing who supplied the brick red, custom-stamped, flat-top, FB1 fastbacks and gold-plated minis for the trophies.

Many local Frisbee players came together for those early sponsored tournaments and the Wednesday night jams, but the four “founding fathers” who successfully nurtured the idea of a local club into a reality were George “Gus” Otto, John “Two Finger” Grieg, Paul “PTflydisc” Thompson, and Lightnin’ Lyle Jensen, MFA members 001, 002, 003 and 004, respectively. One would be hard pressed to imagine a more diverse congress of characters than those four: a single-digit-body-fat physical specimen; a rock ‘n’ roll, over-the-road trucker; a world-traveled, Peace Corps volunteer; and an under-employed, substitute English teacher.  Diversity notwithstanding, each of them shared a great love affair with the flight of the disc and that singular connection over the years brought many more “lovers of the disc” into the MFA tradition, a tradition built upon the pillars of education, promotion and competition by a team of relentless and innovative volunteers who personified the freedom of Frisbee flight with joy, imagination and fair play.

The Minnesota Frisbee Association has foundational roots going back to Wham-O’s International Frisbee Association(IFA) which in 1975 was, for all practical purposes, the only “sanctioning body” of the world-wide, flying disc community. Truth be known, when the MFA was officially recognized by the IFA as part of its affiliate program, the accompanying printed certificate read “Minnesota Frisbee Club.” One would have thought the word FRISBEE would have been changed to FLYING DISC, but instead ASSOCIATION was for some unknown reason changed to CLUB, which has been ignored ever since. However, in just a few short months the lawyers started enforcing “the word Frisbee is only to be used as a trademark- protected adjective” by adding the dreaded circle R [®] along with the generic noun DISC or FLYING DISC with greater consistency as the MFA ordered more custom hot-stamped “club logo” discs. Let the “nominative fair use” discussions begin! After all, in 1975 the MFA was an extremely early adopter of the “hey, let’s start a club” concept. Of course, there are few older flying disc clubs in the United States, but most flying disc historians would agree that the MFA is probably the oldest statewide (vs. local or city-based) Frisbee organization in the United States.

The IFA promoted disc sports, oversaw national and world competitions (the MFA would run many IFA events under the legendary banner “Sky of 10,000 Frisbees” tournament), and ran the Proficiency Rating Program. The rating program ended with the dissolution of the IFA in 1983 when Wham-O was sold to Kransco. At that time there were a little over 100 World Class Frisbee Masters (WCFM), internationally; only three MFAers achieved this highest proficiency rating: “Little” Jon McLaughlin(007), Lightnin’ Lyle and the MFA’s first real mover and shaker Jim Challas(037).

By the fall of 1975, Minnesota native son Jim Challas returned home from palling around with reigning World Frisbee Champion Bruce Koger in Chicago and quietly exploded onto the Minnesota Frisbee scene. By December 1975, he and 15 other MFAers appeared as halftime entertainment for the 3rd Annual Pillsbury Holiday Classic, hosted by the University of Minnesota’s Golden Gopher men’s basketball team at the Met Sports Center in Bloomington, Minnesota, future site of IKEA furniture. Mountain Dew’s Mill City Flyers guts team [Grieg, Otto, Jensen, McLaughin, Wachholtz(005)] was on hand for a mid-court demo, a co-ed pairs throw and catch clinic ensued, and Challas and PTflydisc demonstrated 1975 “state-of-the-art” freestyle. The show finished with “team MFA” tossing discs into the appreciative crowd of some 10,000 college basketball fans.

The MFA’s University of Minnesota connection was further solidified in 1976 when Challas once again entered the halls of academia and the MFA became an “official” student organization, complete with mailbox, access to the student bank, a ditto machine for newsletters and other mailings, the ability to schedule Monday night indoor practices in a small gymnasium, and use of the field house for indoor tourneys.  In the spring of 1976, the MFA hosted a tournament at the Old Brickyard that attracted what had now become the “regulars” and a handful of “newbies,” and with Challas as the tournament director, he would earn a few credits for his Organizational Behavior class project. In the spring of 1977, this tournament would quadruple in size, secure an official sponsor, Hoigaard’s (Minnesota outdoor goods and apparel retailer since 1895), and brandish a new name—The Spring Fling.

Nineteen Seventy-six was a pivotal year for the Minnesota Frisbee Association as it hosted its first of many national and world events, the I.F.A. North American Series overall tournament. The best Frisbee players from all over the United States descended upon Powderhorn Park in Minneapolis to compete in Accuracy (Challas beat Eastern Champion and IFA Director Dan “Stork” Roddick (547) to become the Western National Champ); Maximum Time Aloft (Lightnin’ Lyle finished 3rd to World and National Record Holders, Ken Westerfield and John “Friz Whiz” Kirkland; Freestyle (Jose Montalvo and Chau Rottman finished first, well after sunset amid a circle of automobile headlights). The records for the winners of the distance and disc golf events are deeply buried in the MFA’s historical archives, but what we do know is that another MFA “mover and shaker” was one of the many spectators in attendance at that first NAS tourney. He was walking the golf finals with his old Colorado college buddy, Doug Newland (PDGA 016), and after witnessing Disc Golf first hand, future PDGA Hall of Famer Jumpin’ Joe Feidt (117) would inexorably alter the course of the Minnesota Disc Sports.

From its earliest beginnings, the MFA has promoted and supported all types of disc play from guts to ultimate to freestyle and everything in between, but over the years, the MFA has developed into a club with a strong focus on Disc Golf due in part to the participation of Minnesota’s overall players, but mostly to the efforts of early disc golf adopters and specialists like Art Magnuson(016) and of course, Jumpin’ Joe. Jumpin’ Joe would publish the original disc golf exclusive publication, The Roller, with help from his boyhood friend and Minnesota disc sports benefactor, Louis Newell(240); host the oldest disc golf tourney in Minnesota, the Kenwood Klassic; become the original editor and publisher of the PDGA’s Disc Golfer newsletter in the 80’s and Senior Editor of Disc Golfer magazine in the 21st century; as well as conceive and introduce the first DG tournament series in the U.S., the Minnesota Summer Tour; and hold the title of Minnesota Disc Golf State Champ in 1986.

The confines of time and space prevent paying much deserved respect and notation to each and every “mover and shaker” who changed the promotional, educational and competitive landscape of Minnesota Disc Sports, but it would be remiss to not mention a few members of the “old guard” who helped breathe life into the MFA in the early days: Beth Bauder, Pamela Fitzgerald, Ken Kraemer, Mike Hadenfeldt, Linda Veldhuizen, Merrick and Ruth Brown, Tim “Chico” Mackey, Steve Hubbard, Robin Blanc, Phil Johnson, Barb Zander, Mark Jenkins, Ron Pitts, and Dave Wagner who were there back in the day shaking it up and making all things Frisbee happen.

Without a doubt some well deserved, Frisbee loving, MFA do gooders were left out. Sorry! Just drop Lightnin’ Lyle, MFA’s Historian Emeritus, a line at , and he will correct any oversight in the next installment of Minnesota Frisbee Association: The Early Years. 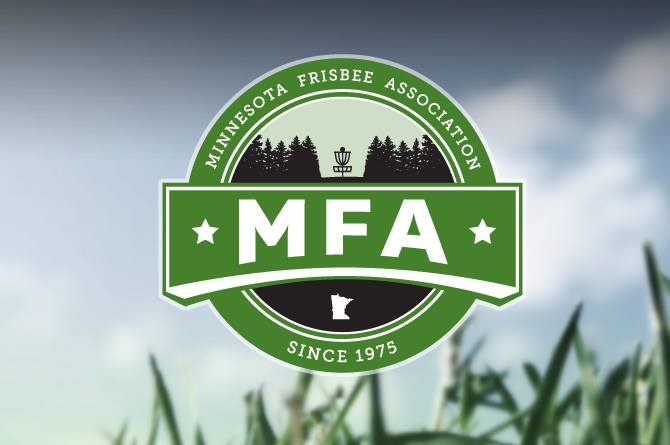